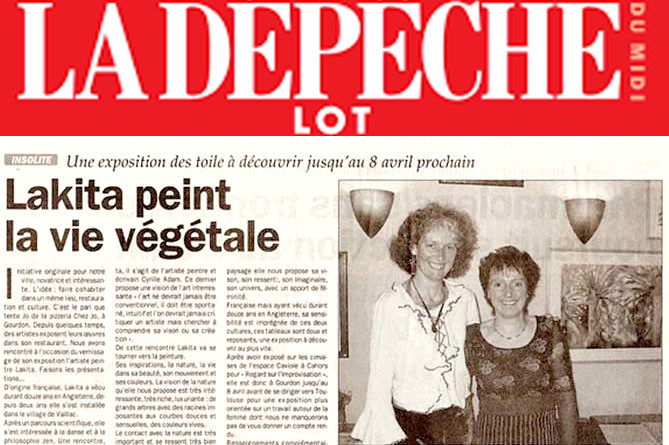 Hélène Blandin, aka Lakita, came to settle in Vaillac, in the Lot, in 2001. She paints the plant world in paintings that look like her: transparent, sensitive, aerial, beautiful trees or then tropical trees with warmer colors. and exuberant flowers … Lakita exhibits her work at the Lacave Caves all summer long.

The painter participated in Paris in the annual exhibition of painters “nature and animals”, but she also leaned, recently on oil painting. The trajectory of this woman with an almost shy smile is multiple. First of all she did scientific studies in biology. She lived in England and discovered shiatsu there, the Japanese art of healing with finger pressure using the acupuncture points of Chinese medicine. She became a practitioner of the method. But a change has begun.

Hélène Blandin became a painter. Returned to France to join the Beaux-Arts of Toulouse, she finished her training and moved to the Lot, in Vaillac. “I did not even ask myself where I was going to live in France. The Lot was the only choice possible. It is the land of painters. And she does not regret it. She likes to live there, the neighbors do it well, her house on the edge of the stream that runs through the village is like in one of his paintings, bucolic, natural, and authentic. Helen had the excellent idea to participate in the life of the village by proposing to restore the Virgin Mary, metal statue in front of the church, in very bad condition.

Today, arriving at the center of the village, we only see that, the beautiful virgin with bright colors, it looks straight out of an illustration of the beginning of the last century.

We use cookies to improve your experience when you browse our website and to collect certain information.

This website uses cookies to improve your experience when browsing the website. Of these, cookies categorized as necessary are stored on your browser as they are essential for the functioning of basic functionalities of the website. We also use third-party cookies which help us analyze and understand how you use this website. These cookies will only be stored in your browser with your consent. You also have the option of deactivating these cookies. Disabling some of these cookies may affect your browsing experience.
SAVE & ACCEPT
Powered by